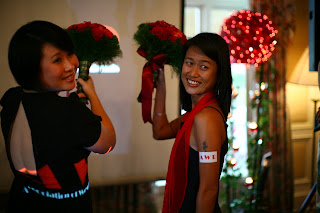 Leticia & I first met back in early 2005. It was thanks to Kris, another industry friend and partner-in-crime who made this 'meeting' happen. He got us both on a radio interview together.

We've heard how bitchy the industry can get - but the two of us simply hit it off quite well from the get-go. Sometimes, it's difficult to say why or how. It's just good vibes. And likely - smart thinking from both parties.

I guess it was at this point, we were feeling that perhaps individually, it would be difficult for us to conquer the world. Hmmm...It was just a matter of the stars being aligned *eyelash batting*. In any case, we didn't waste time with the new-found friendship. It very quickly materialized into an "online love affair" - we exchanged trade secrets, we shared information about good vendors, bad vendors and the plain nasty ones, we passed on clients to one another when our dates were booked, we warned one another about potentially "psycho" clients... and really..... that "online love affair" of ours still exists right up till today - it must say something when I exchange more emails with Leticia than I do with my real lover.. and vice-versa!

We kept our own businesses running and even though we were supposedly competition - we actually didn't really see it that way. Simply because our working styles were quite different. They still are. Naturally, the types of clients we attract are very different too. She's the feminine, girly-girly type.... whilst I am more athletic and outdoorsy. As such, herein lie the differences between our portfolios - she features prim-and-proper weddings whereas I feature the breezy destination weddings which are usually outdoors. We are even bitchy in our own different ways! (That's right - we admit that we are. Plain and simple - you don't run your own businesses by being a push-over).

Where we synergize is through our "let's go get it" attitude and our very head-strong characters. We are both the types who would twitch with anxiety when the work platter is empty. And even if it was full, we would still be coming up with fantastic ideas and saying "Do you want to do it??" and the next thing you know - we're working ourselves halfway through a whole full platter of work. We don't give up easily and we are simply said - pretty damn strong. Not just "head-strong", but physically and mentally strong too. And you know what? We deliver.

So, believing that since two stubbornly head-strong characters could combine their efforts to make it work very well for their businesses, and having been encouraged by Tourism Malaysia, we sat down for coffee one day, and decided we were going to start an Association. Thinking (stupidly!) that the entire wedding industry, like us - also believes in the "United We Stand" concept. And thus - the birth of Association of Wedding Professionals (AWP) Malaysia in September 2008. The Association was the first venture that Leticia and I worked together on - and I have to say - even I was surprised at how well we worked together!

We're still working very hard on the Association and trying to sign-up more "believers". We are grateful and thankful of course, to those who had supported us in this endeavour. You could go to AWP's website to see all the good stuff that we had done for the Association and the members thus far.

We had not looked back since the founding of AWP. We've worked on numerous projects together and it was only a matter of time before we really joined forces - this time, to take on the Indochina market with The Wedding Planners. And there are numerous more projects in the pipeline that we are looking forward to doing together.
Because - one thing's for sure - why settle for one of the best when you can have two of the best?

**Photo taken at the AWP Launch on 4th September 2008
Posted by dolphintales at 1:02 AM